This recipe makes 4 portions, which contains 6pp per portion. If you make it with 30 grams of uncooked quinoa on the side like I did, add 3pp.

Ingredients for the stew: 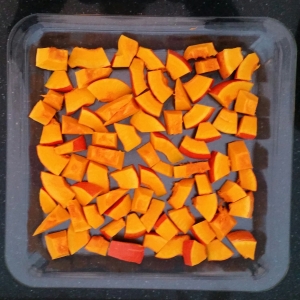 Turn on the oven on 360° F/180°C. Put a few drops of oil on your oven plate and spread it with a piece of kitchen paper or use a baking sheet. Spread the pumpkin pieces on the plate and put in the oven for about 40 minutes, check for it regularly to avoid burns. I use the skin too! 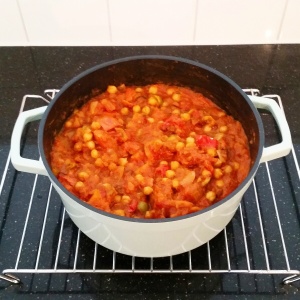 Chop 2 onions, the olives and put it with oil, the spices and the raisins in a pan. Fry it slightly. The other onion, the tomatoes, the pepper, the garlic and the ginger should be pureed together in a kitchen machine. Add the chopped bell pepper and fry a little, then add the pureed stuff, the stock blocks and the canned tomatoes. (I put a table spoon of the pureed stuff with the quinoa while boiling it) Let this stew for about 20 minutes, stir from time to time. When the pumpkin is finished, add it to the stew and cook it for another 10 minutes. Now add the chickpeas cans with the fluid from the cans. Cook it for a minute or two and you’re done!

In the meantime I boil the quinoa, use the description on the package. To make it taste better, wash it before using it and add stock, spices and a bit of the pureed veg/spice mixture.

Devide in 4 portions, put it in the fridge or freeze it, or eat right away of course! 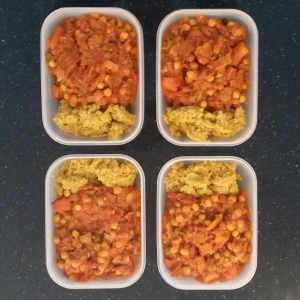 PS: You can’t eat food without meat?? Replace a can of chickpeas with 250 gr of lean beef.